Not long ago, we talked about the rise of OTT services and its boost on traditional television numbers. In this post, we will discuss about the OTT investment dynamics from all the parties in the entertainment distribution chain.

The rise of niche content developments from the likes of Netflix, as well as well as smaller, more specialist services like Crunchyroll is a sure-fire sign of the hunger today’s content providers have to expand their services, and the fact that they’re willing to invest large sums to make it happen.

As consumers appetites for OTT develop, it seems as though investments in OTT are rising rapidly to live up to expectations and take video streaming to the next level.

As consumers become even hungrier for SVOD content, traditional media entities like Time Warner, NBCUniversal, and Discovery Communications are spending big bucks in developments that will secure them a long and prosperous future.

In fact, Discovery Communications recently announced it had made a $100 million deal with Group Nine Media, which houses digital media brands including Thrillist,  NowThis, and the Dodo, among others. Between this and NBCUniversal‘s $400 million investment in BuzzFeed and Vox Media alone, it’s clear that traditional media companies want to appeal to the next generation of consumers while betting on where new digital media niches are going.

And this all happened before the mega-merger of AT&T and Time Warner. This deal aims to shift the media landscape drastically, where both companies wanting to expand their core businesses. For AT&T, the step is triggered by the increased competition in of mobile cell-phone market, with profits harder to come by. And for Time Warner, the fact that cable subscribers become cord-cutters in record numbers is a big enough reason.

Despite the recent trend of media investments, it seems that OTT is massively outspending linear broadcasters. 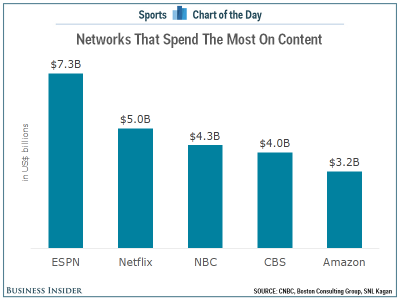 As more people begin to migrate to online video, big players like Amazon and Netflix are spending more than ever on expanding their reach to other countries and producing their own brand of niche localised content.

Between 2013 and 2015, Netflix and Amazon more than doubled their annual spend on programming alone. During this period, Amazon spent between $1.22 billion, and that jumped to $2.67, and Netflix investments rose from $2.38 billion to $4.91 billion – colossal figures in anyone’s book.

Tim Westcott, senior principal analyst at IHS Technology, explained, “the levels of investment we are seeing from Netflix and Amazon are only topped by Disney ($11.84 billion) and NBC ($10.27 billion).

In terms of content spending, we see interesting rankings, where ESPN, as one of the sports broadcasting giants, even outspends the OTT giants like Netflix and Amazon (see chart from right). Sports video is increasing its value and price due to the recent dynamics of sports rights prices.

It’s plain to see that as the appeal of OTT spreads and opportunities in foreign markets emerge, investments in the future of SVOD will see it develop and diversify more than ever before.

There are many examples of renowned media moguls investing in SVOD content, but perhaps the most notable in recent times is MTV‘s Andy Schuon. The former MTV programming chief is using his skills and expertise to launch what he describes as a global media, information and technology company focused on OTT and multiscreen content.

The new media giant, known as Every Day Networks is looking to distribute its eclectic mix of OTT programming to around 70 territories worldwide and catapult the company into this new wave of content consumption, full pelt.

Another big player to make big investments in OTT is Time Warner. Aside the merger with AT&T, Time Warner has invested $12 million in You.i TV as part of a Series B funding round for the OTT interface developer, this focusing on its digital platforms more than ever before. This bold investment signifies Time Warner’s understanding of the importance of digital streaming and the revenue opportunities it brings.

And the spending keeps on coming. ProSiebenSat.1 has invested a colossal US$30 million in OTT service Pluto TV, making it the largest strategic shareholder in Pluto TV with a roughly 14% stake. An incredible level of OTT funding.

With more investments, deals, and developments happening than ever before, plus a healthy international hunger for quality SVOD content, the future looks bright for OTT – and for the savvy content provider with a healthy budget, the sky’s the limit.

Learn more about why sports broadcasters decide to invest in over-the-top solutions:

Summing up CES 2020 and the start of the year

How to fight churn with subscriber segments

Learn more about the online video industry and how to sell video over-the-top.